As we approach our 30’s and beyond, we begin to notice wrinkles around our eyes, forehead and mouth, a normal occurrence due to natural repetitive expressions like smiling and frowning. There is a simple, non-surgical method of reducing these wrinkles and in some cases, making them disappear:

BOTOX® Cosmetic is the only FDA-approved treatment to temporarily improve the appearance of both moderate to severe frown lines between the brows and crow’s feet in adults.

Sheri will consult with you to develop a personalized program to enhance your natural beauty. Below are some examples of how BOTOX® Cosmetic can potentially work for you. 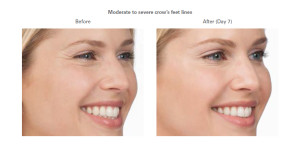 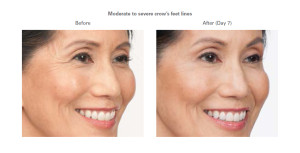 Postmarketing reports indicate that the effects of BOTOX® Cosmetic and all botulinum toxin products may spread from the area of injection to produce symptoms consistent with botulinum toxin effects. These may include asthenia, generalized muscle weakness, diplopia, ptosis, dysphagia, dysphonia, dysarthria, urinary incontinence and breathing difficulties. These symptoms have been reported hours to weeks after injection. Swallowing and breathing difficulties can be life threatening and there have been reports of death. The risk of symptoms is probably greatest in children treated for spasticity but symptoms can also occur in adults treated for spasticity and other conditions, particularly in those patients who have an underlying condition that would predispose them to these symptoms. In unapproved uses, including spasticity in children, and in approved indications, cases of spread of effect have been reported at doses comparable to those used to treat cervical dystonia and upper limb spasticity and at lower doses.

Indications
Glabellar Lines
BOTOX® Cosmetic (onabotulinumtoxinA) for injection is indicated for the temporary improvement in the appearance of moderate to severe glabellar lines associated with corrugator and/or procerus muscle activity in adult patients.

Lateral Canthal Lines
BOTOX® Cosmetic is indicated for the temporary improvement in the appearance of moderate to severe lateral canthal lines associated with orbicularis oculi activity in adult patients.

IMPORTANT SAFETY INFORMATION (continued)
CONTRAINDICATIONS
BOTOX® Cosmetic is contraindicated in the presence of infection at the proposed injection site(s) and in individuals with known hypersensitivity to any botulinum toxin preparation or to any of the components in the formulation.

WARNINGS AND PRECAUTIONS
Lack of Interchangeability between Botulinum Toxin Products

The potency Units of BOTOX® Cosmetic are specific to the preparation and assay method utilized. They are not interchangeable with other preparations of botulinum toxin products and, therefore, units of biological activity of BOTOX® Cosmetic cannot be compared to nor converted into units of any other botulinum toxin products assessed with any other specific assay method.

Hypersensitivity Reactions
Serious and/or immediate hypersensitivity reactions have been reported. These reactions include anaphylaxis, serum sickness, urticaria, soft-tissue edema, and dyspnea. If such reactions occur, further injection of BOTOX® Cosmetic should be discontinued and appropriate medical therapy immediately instituted. One fatal case of anaphylaxis has been reported in which lidocaine was used as the diluent and, consequently, the causal agent cannot be reliably determined.

Pre-existing Conditions at the Injection Site
Caution should be used when BOTOX® Cosmetic treatment is used in the presence of inflammation at the proposed injection site(s) or when excessive weakness or atrophy is present in the target muscle(s).

DRUG INTERACTIONS
Co-administration of BOTOX® Cosmetic and aminoglycosides or other agents interfering with neuromuscular transmission (eg, curare-like compounds) should only be performed with caution as the effect of the toxin may be potentiated. Use of anticholinergic drugs after administration of BOTOX® Cosmetic may potentiate systemic anticholinergic effects.

The effect of administering different botulinum neurotoxin products at the same time or within several months of each other is unknown. Excessive neuromuscular weakness may be exacerbated by administration of another botulinum toxin prior to the resolution of the effects of a previously administered botulinum toxin.